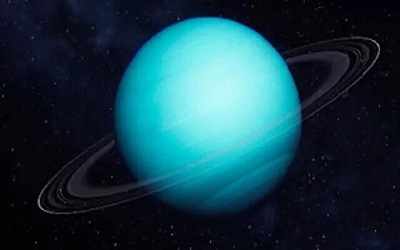 In this article, you know interesting facts about Uranus planet in which we will talk about the number of Uranus moons. The universe has many galaxies. We leave in a milky way galaxy that has many stars, planets many asteroids but also our solar system situated in the milky way galaxy. Our solar system contains Sun and eight planets revolve around the sun.

It is a big planet having a ring of ice particles. It is the 7th planet from the Sun (order of the planets in sequence from the Sun: Mercury, Venus, Earth, Mars, Jupiter, Saturn, Uranus, and Neptune) and has a blue-green color and many satellites. Along with being the coolest planet in the Solar System, it is the first planet discovered in the modern era. There is a lot to learn about it.

1. According to the distance from the Sun, It is the seventh planet. It’s about 280 million kilometers from the Sun and sunlight travels from the sun to Uranus in 2 hours and 40 minutes.

2. It was discovered before the Antarctica continent.
3. It is the first planet to be discovered in the modern era. It was discovered by the German-born British astronomer and composer ‘Frederick William Herschel’ on 13 March 1781. They are also known for exploring infrared rays.
4. Irani is named after the Greek god, it is believed that It was the father of Saturn.

5. The summer season on Uranus is 42 years long.
6. It is the coldest planet in the solar system, the lowest temperature is recorded at -224 degrees Celsius so that this is called an ice giant.
7. It is the third-largest planet in radius and holds the fourth position in mass in the solar system.
8. In 17 hours and 14 minutes this planet completes one rotation on its axis so one day on it is approx 17 hours. It takes 84 years or 30,687 days to revolve around the sun.
9. It revolves around the sun in the opposite direction of the earth. It rotates in the East to West direction but earth and other planets revolve in the West to the east. Venus also follows Uranus’s rotation direction around the sun.
10. It is 14.5 times heavier than earth. The mass of it is 8.68×1025 kg.
11. Uranus has 13 known rings and 27 moons but these are small and irregular. It has the third position in the most moon in the solar system. It has five major and rockier moons are Miranda, Titania, Ariel, Umbriel, and Oberon.
12. You can see this planet in the sky without a telescope but the condition is that sky is dark at night there is no light pollution.
13. The gravity of the earth is 9.8 m/s² but the gravity of Uranus is 86% of earth surface gravity which is equal to 8.87 m/s².
14. It was one of the first three planets which are discovered before telescope invention.
15. The atmosphere of it mostly contains hydrogen(83%) and helium(15%), with a small amount of methane(2%) and small traces of water and ammonia. The methane gives Uranus its signature blue color. The environment of this planet is not conducive to life and this is most likely too extreme and volatile for organisms to adapt to.
Share this post